Wrecking Ball is a brand new concept for kids and adults of all ages! It's big, it's bold, and it's extreme! It's the ultimate high energy game. Four players climb atop their inflated pads. One of the players grabs the "Wrecking Ball" and hurls it at their opponent in an attempt to knock the player off of their inflated pad. As the "wrecking Ball" swings back, the player tries to grab it! The player who grabs it first, then hurls it at another player, trying to knock that player off. The last player standing is the champion! Lots of fun to play and watch. 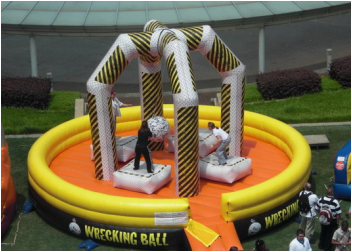 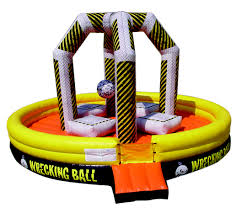